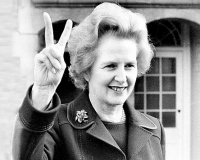 Description: This house was bought by Margaret and Denis Thatcher in 1967, but the house first hit newspaper pages in the early 1970s, when the Iron Lady-in-waiting was Education Secretary.

Her abolition of free school milk attracted hordes of photographers and the extremely catchy 'Thatcher the milk snatcher' nickname.

In 1975, when Thatcher succeeded Edward Heath as Conservative leader, photographers again camped outside the house and took the famous picture of her sweeping the front patio, refusing to comment on the outcome of the contest.

It is believed that the dining room, which now boasts light oak panelling and a 'boardroom ambience', was the venue for the first meeting of her shadow cabinet.

The three-storey house, worth about Â£28,000 in 1967, has four bedrooms, three reception rooms, and parking space to the rear.