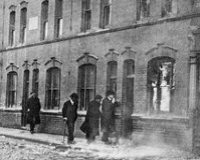 This is where Latvian murderers dargged their leader to in 1910.

Description: After the murder of two Sergeants in Houndsditch on 16th December 1910, the gang of Latvian revolutionaries dragged their wounded leader George Gardstein here - almost 3/4 mile away. An intense search followed, and a number of the gang or their associates were soon arrested.

The episode ended with the Sidney Street Siege on January 1911.