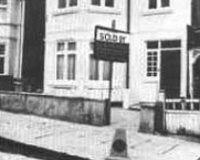 This was the former home of Dennis Nilsen, gay serial killer.

Description: When police caught serial killer Dennis Nilsen in 1983 in Muswell Hill, they found that his former home (here) had been where 13 undiscovered murders had taken place.

Over the following days and weeks police recovered bones from about eight different bodies from the land around Melrose Avenue.

In spite of initially admitting to 16 murders Nilsen denied six counts of murder and two counts of attempted murder in the Central Criminal Court in October.

Later in 1983 he was charged with 12 murders and sentenced to six life sentences.