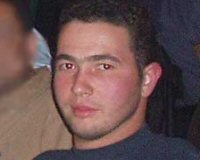 The location of the shooting of Jean Charles de Menezes.

Description: This is where on 22nd July 2005 Jean Charles de Menezes was shot dead by police who mistook him for one of four would-be suicide bombers who attacked London's transport system the previous day.

Police in the capital were on heightened alert as they hunted the attackers, who struck just two weeks after 52 people were killed in similar co-ordinated suicide bombings.

Here, after fleeing from his nearby flat with officers in pursuit, Mr Menezes got off a bus in Stockwell Road, a short walk from the Tube station.

He crossed Clapham Road and entered the station at about 10am, stopping to pick up a copy of the free Metro newspaper before passing through the automatic ticket barriers, using his Underground pass.

At least one witness initially said he saw the man vaulting the barriers. But he later acknowledged that it could have been one of the pursuing officers.

He began travelling down the escalator towards the northbound Northern Line platform, and at some point began running towards the train.

Mr Menezes entered a carriage of a northbound Northern Line train and sat on a seat facing the platform, before a struggle and being shot several times by officers. He died at the scene.

In the hours after the shooting - but before police realised their mistake - Scotland Yard said it had been directly linked to their anti-terrorist operation.

Metropolitan Police Commissioner Sir Ian Blair told a news conference: As I understand the situation, the man was challenged and refused to obey police instructions. The Yard said his clothing and behaviour at the station added to their suspicions.

But when it emerged that the 27-year-old Brazilian was not the man they thought he was - and that his death had been a mistake - Sir Ian described it as a tragedy for which the police accepted full responsibility.

Manson and the Talgarth Hotel», 3.8km