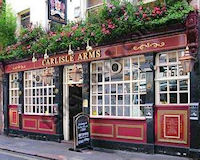 The scene of one truly daft and bizarre death.

Description: Today it's Simmons Bar, but not long ago this was a traditional West End boozer with a bizarre death in its history.

The story goes that in November 1893 a young man called Walter Cowle, an envelope-cutter had visited his regular here, the Carlisle Arms Tavern, to meet with friends.

A bit of a joker, Cowle claimed he had the ability to place a large billiard ball in his mouth and close his teeth. His friends were eager to see this trick performed, and so the landlord was requested to produce one which he did after several assurances that Cowle would not actually put the ball in his mouth, but would use sleight of hand to amuse and trick the gathered company. A good friend of Cowle's insisted he had seen Cowle do the trick many times, and it had never gone wrong before.

Unfortunately something went wrong, and Cowle attempted to swallow the ball, immediately choking. There was little the collected crowd could do. They held him upside down, slapped his back, and tried to remove the ball from his mouth, but nothing worked and Cowle was soon pronounced dead.