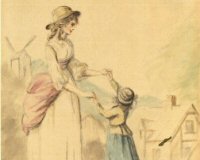 This is where Boswell's dandy Topham Beauclerk lived and died

Description: This is where Topham Beauclerk (1739-1780) lived with his wife Lady Diana.

Topham Beauclerk entertained his good friend Dr. Johnson many times, and Topham appears several times in Boswell's Life of Johnson. As Bennet Langton records: 'His affection for Topham Beauclerk was so great, that when Beauclerk was labouring under that severe illness which at last occasioned his death, Johnson said, (with a voice faultering with emotion,) Sir, I would walk to the extent of the diameter of the earth to save Beauclerk' (Boswell 1072).

His wife Diana was also an illustrator (example shown in image) as well as a noblewoman, and she illustrated a number of literary productions, including Horace Walpole's tragedy The Mysterious Mother, the English translation of Gottfried August Brger's Leonora (1796) and The Fables of John Dryden (1797). After 1785 she was one of a circle of women, along with Emma Crewe and Elizabeth Templetown (1747-1823), whose designs for Josiah Wedgwood were made into bas-reliefs on jasper ornaments.

The house included a library by famous architect Robert Adam.

Topham died here on 11 March 1780, while Diana retired to Richmond eventually. The house itself was demolished in 1788 and replacd by this row of Georgian townhouses.

The George and Vulture», 1.8km