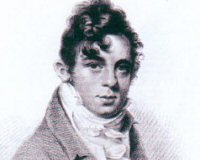 This is the location of one of the world's most famous hoaxes.

Description: The Berners Street Hoax was a famous hoax perpetrated by writer and humorist Theodore Hook here in 1810. Hook had bet his friend Samuel Beazley a guinea that he could transform any house in London into the most talked-about address in a week.

On November 10 at nine oclock in the morning, Mrs. Tottenham, the occupant of this house began receiving a large number of deliveries and visitors. Various trades people arrived claiming that they had been summoned to her house by letter. Dignitaries, including the Governor of the Bank of England, the Archbishop of Canterbury and the Mayor of London also arrived. So many people crowded into the narrow street that fights broke out.

Hook had sent out thousands of letters purporting to be Mrs. Tottenham and requesting deliveries, visitors and assistance. He was soon revealed as the instigator of the prank.

The following are a few of the notes sent in the name of Mrs. Tottenham, for the purpose of collecting this most extraordinary group:

Mrs. Tottenham requests Mr.-- will call upon her at two to-morrow, as she wishes to consult him about the sale of an estate. -54, Berners-street Monday.

Mrs. Tottenham requests that a post-chaise and four may be at her home at two to-morrow, to convey her to the first stage towards Bath. -54, Berners-street, Monday.

Mrs. Tottenham begs the Hon. Mr.-- will be good enough to give her a call at two to-morrow, as Mrs. T. is desirous of speaking with him on business of importance. -54, Berners-street, Monday.

Theodore Hook, the forgotten genius of the English language. He founded, and wrote anonymously, the brilliantly satirical John Bull newspaper which directly influenced British history in 1820. Hook created the style of political satire which has lasted to the present.

He was the only 'improvisatore' whom the English language has known, instantly composing witty songs on any subject.

He was England's best-selling novelist immediately before Charles Dickens.

The Game of Mornington Crescent», 1.1km