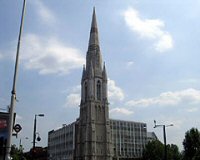 This spectacular spire incorporates the stars and stripes flag.

Description: With the driving force of Rowland Hill this church became the birthplace of the Bible Society, Shaftesbury Society, Ragged School Movement and several other significant social initiatives. William Wilberforce and his crew made it their central London base from which they put an end to slavery in the British Empire.

The landmark spire with it's stars and stripes was donated by Abraham Lincoln's family to thank the church for their support and inspiration in the battle for the emancipation of the slaves in America.

The church is built on the site of a female orphanage, which was founded in 1758. The local clergyman received donations to build the church, and due to his support of the Union during the American Civil War, the spire was known as 'Lincoln Tower'.

The church was hit during the Second World War, and only the spire remained. The spire was saved and an office block was added to it in the 1960s.

A Pyramid in Limehouse», 3.5km

The Black Madonna of Willesden», 6.8km