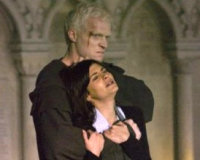 The scene of Silas' last stand in The Da Vinci Code

Description: This is where the Catholic institution Opus Dei have an office and the scene in Dan Brown's book - The Da Vinci Code - where the evil albino monk Silas makes his final stand.

Under the malevolent influence of the Teacher, Silas - the murderous albino monk - seeks refuge in the London headquarters of the secretive Opus Dei. With the police closing in on him, he flees and in his delirium shoots his scheming mentor Bishop Aringarosa.

The minority Catholic sect is very unhappy about their depiction in the novel. The hard-line, traditionalist group are keen to keep a low profile; membership is by invitation only. They have been criticised as the Catholic equivalent of the Freemasons, and despite the recent canonisation of founder Jose Maria Escriva, their close links to the Franco regime in Spain have not been forgotten.

The former education secretary Ruth Kelly is reputedly a member.

Chaucer Lived Over the Aldgate», 4.7km