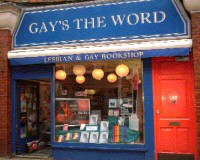 London's only gay bookshop, camping it up here since 1979

Description: Gay's The Word has been selling books here since 1979.

American novelist Edmund White, author of A Boy's Own Story, said: It's a shop that keeps gay titles on the shelves for years in a way no regular bookshop, even one with a gay section, would ever do. The staff know the books and can give advice. It would be very sad to see it go.
Booker-nominated novelist Sarah Waters said: For me it's more than a bookshop. It was one of those places you went to when you first arrived in London; it had its noticeboard and it was a meeting place. It felt very empowering that it was here and it is still important that there is a visible place for people to go.

The shop, which was founded by bookseller Ernest Hole, sells a range of gay-themed fiction and non-fiction from around the world, and is one of the most enduring symbols of gay life in London. But it has suffered from not being located in the gay centre of the capital, Soho.