Breakfast at the Wolseley 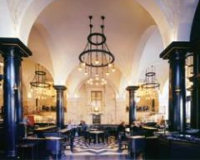 The classic European cafe that used to be a Wolseley showroom.

Description: The Wolseley is a caf-restaurant in the grand European tradition located in St James on Londons most famous of boulevards, Piccadilly.

In 1921, Wolseley Motors Limited commissioned the architect, William Curtis Green, to design a prestigious car showroom in Londons West End. He drew on Venetian and Florentine influences and made the interior very atmospheric with its grand pillars, arches and stairways.

The Wolseley cars were displayed on the marble floor and cost between 225-1300. Unfortunately, the cars did not sell well enough and by 1926 the Company was bankrupt.

Barclays Bank acquired the building and the branch opened for the first time in April 1927. William Curtis Green was recalled to install offices and a banking counter retaining the Japanese lacquer theme. He also designed specialised furniture including a post box and stamp machine, which is on display today. Barclays remained until 1999.

Chris Corbin and Jeremy King secured the site in July 2003 and its restoration and renovation was overseen by David Collins Architects.

The Wolseley opened in November 2003.

This was where the late great Lucian Freud dined most nights. On his death in July 2011, they covered his favourite corner table with a black cloth and lit a solitary candle.

2» When a tourist started taking photographs at the Wolseley, naughty Lucian Freud threw bread rolls at them. (Lucy)
Posted by Lucy on 2011-07-23
1» This was where the late great Lucian Freud dined most nights. On his death in July 2011, they covered his favourite corner table with a black cloth and lit a solitary candle. (Dr Carl Mascus)
Posted by Dr Carl Mascus on 2011-07-23

Farming Markets for a Decade», 0.8km