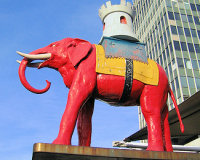 The Chinese Bridge and Pagoda», 1.5km