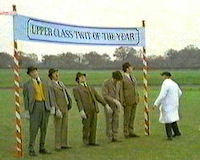 Description: Hurlingham Park is a multi-use stadium in Fulham where the first ever Fulham FC boys team were supposed to have played.

It is best known as the location for Upper Class Twit of the Year in 1969, a classic comedy sketch that was seen on the TV show Monty Python's Flying Circus and the movie And Now For Something Completely Different.

To a horse race style commentary by John Cleese, it is about an obstacle-course race between 5 stereotypical, upper-class twits to determine the 127th Annual Upper-Class Twit of the Year.