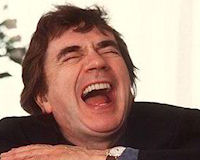 This is where a young Dudley Moore lived.

Dudley attended Green Lane School (now Henry Green Primary School) followed by Dagenham County High in Parsloes Avenue. He won an organ scholarship to Magdalen College, Oxford and later joined the comedy revue Beyond the Fringe in 1960. He shot to stardom however with the much loved partnership and double-act with Peter Cook as Dud and Pete in the TV series Not Only... But Also.

Dudley later starred in Hollywood films 10 and Arthur (for which he was nominated for an Oscar). He was appointed CBE in 2001 and died in 2002.


School to an Eccentric Comedian», 13.km