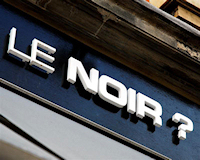 The largest restaurant in the world where you eat in darkness.

Description: This is the largest restaurant in the world where you eat in complete darkness.

Dans le Noir? was founded by Edouard de Broglie and Etienne Boisrond in 2004 in Paris with the support of the Paul Guinot Foundation for Blind People.

Dinners in total darkness are said to have existed from the late 19th century even though it is difficult to verify it. In the 90's, researchers like Andreas Heineke in Germany or Michel Reilhac in France have tried to develop this concept further by organizing (mostly over the last decade), all over Europe across a full range of experiences such as dining, dark bars, tactile and audio exhibitions, art performances of course all of them in complete darkness.