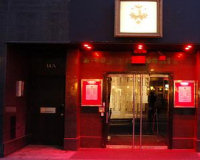 This is where footballer Ledley King was arrested.

Description: This is the nightclub where Tottenham Hotspur star Ledley King was arrested.

The Spurs captain was questioned on suspicion of assaulting another man in Soho in the early hours of Sunday.

The venue, formerly known as Nightclub Pop, attracts a celebrity crowd with guests including Kate Moss and Lily Allen and offers table bookings with a minimum spend of 500.

Ledley King has 19 international caps and was in the England squad for the 2004 European Championship.

He has appeared more than 250 times for Tottenham.