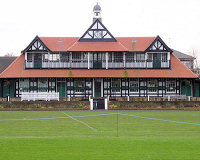 This is where Sutcliffe and Holmes made their record stand.

In the first two seasons here Alfred Lord Tennyson wrote about poem about this ground!

In 1898 WG Grace scored 126 and 49 here, and also took 7 wickets for 44 as Gloucestershire won an ill-tempered match. Grace claimed that he had never been as insulted as he was here. He had been bowled after some aggressive bowling and the bowler told him as he walked off Surely you're not going, Doctor, there's still one stump standing.

Essex's greatest success here was in 1905 when they beat the touring Australians.

On 16th June 1932 Sutcliffe and Holmes made a record opening stand of 555 for Yorkshire's cricket team here away at Essex.

The ground is now under threat to developers.

Home to the Blues or Pensioners», 9.7km