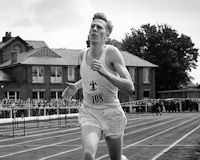 Description: The Motspur Park athletics stadium was built by the University of London in 1928 after acquiring the land for 18,000.

The stadium achieved fame when the world mile record was set there on the 28th August 1937 by Mighty Atom Sydney Wooderson with a time of 4 minutes 6.4 seconds and held for 5 years.

The stadium hosted the University of London Intercollegiate Championships and was the training ground for the London Athletics Club.

The track is long gone, having been removed in 1988.

It was sold to Fulham Football Club as their training ground in 1999 and is now a state-of-the-art sporting facility employing around 200 members of staff.