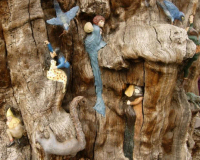 Description: The Elfin Oak is a 900-year-old tree stump next to the Princess Diana Memorial Playground in Kensington Gardens. The hollow log once hailed from Richmond Park, and was moved to Kensington Gardens in 1928 as part of George Lansbury's scheme of public improvements in London.

Between 1928 and 1930 the illustrator Ivor Innes carved the tiny figures of the Little People into it. These included Wookey the witch, with her three jars of health, wealth and happiness, Huckleberry the gnome, carrying a bag of berries up the Gnomes' Stairway to the banquet within Bark Hall, and Grumples and Groodles the Elves being awakened by Brownie, Dinkie, Rumplelocks and Hereandthere stealing eggs from the crows' nest.

The inside cover of Pink Floyd's 1969 album Ummagumma features a picture of David Gilmour in front of the Elfin Oak.

The comedian Spike Milligan was a lifelong fan of the Oak, and in 1996 he led a successful campaign to have it restored. 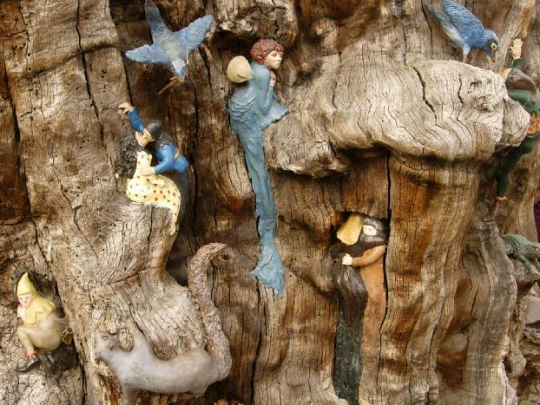