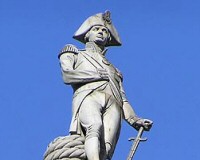 The focal point of the Square, a remarkable Nelson tribute.

Description: Admiral Nelson was one of Britain's best-loved heroes, who fought valiantly for his country and won four notable naval battles, at the personal cost of losing an arm and one eye. Nelson's last and most famous battle was fought off the Spanish cape of Trafalgar, when he defeated Napoleon and the French and Spanish fleets; during which he lost his life, dying aboard H.M.S. Victory.

Begun in 1840, it took three years to erect this magnificent memorial. The granite column is 185 feet high surmounted by a statue of Lord Nelson. Acanthus leaves, cast from British cannons decorate the top, and at the base are four bronze relief panels cast from armaments captured from the French. These panels depict the four great victories of Admiral Nelson. At the four corners of the monument sit the superb Lions - like four great guardians. They were cast in bronze and designed by Edwin Landseer.

He looks over his fleet which he is surveying. The fleet can be spotted atop the streetlamps of The Mall - each of Nelson's fleet depicted including Victory, Britannia and Royal Sovereign.

An Argument about a Brown Dog», 2.2km

The Statue that Copies You», 1.1km