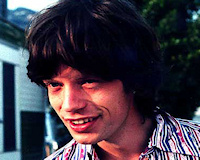 The house Jagger lived in with Marianne Faithful.

Description: This house was the residence of Rolling Stone frontman Mick Jagger from 1968 until 1975. It cost him 50,000. Mick lived there first with Marianne Faithfull and later with his wife Bianca.

In 1969 the house was raided by the Chelsea Drugs Squad and they found a small quantity of drugs - Jagger was fined 200.