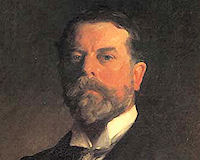 Description: This is where American artist John Singer Sargent's Tite Street studio was. In 1886, with no prospects of making a career in Paris, he closed his studio and soon moved here, where he lived and worked until his death in 1925.

13 Tite Street (later changed to 33 Tite Street) was eventually expanded into 31 Tite Street in 1900, after some architect legal wranglings and he combined both by cutting a hole in the wall and he would use 31 as his residence and keep 33 as his studio.

Today it is privately owned by a working artist.

Walks in Oscar Wilde's London says Sargent was indirectly responsible for Wild's choice of Tite Street as a site for the house he built to live in with his bride. During the short period Wilde had shared Tite Street quarters with Miles, he witnessed Ellen Terry arriving at the Sargent's nearby studio, costumed for his famous portrait of her as Lady Macbeth. Wilde wrote The street that on a wet and dreary morning has vouchsafed the vision of Lady Macbeth, in full regalia magnificently seated in a four wheeler, can never be as other streets; it must always be full of wonderful possibilities.

The home of Lucien Pissarro», 3.7km