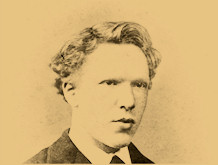 This is where young artist Vincent Van Gogh worked in London.

Description: This is where major European art dealer Goupil & Cie had their London gallery in the 1870's.

After a four year apprenticeship at the head office in The Hague, the company posted the 20 year old Vincent Van Gogh here in June 1873.

Vincent was full of energy and optimism and had high hopes for his new career, he lodged in Lambeth and spent an hour walking here each day. He wore his top hat - You cannot be in London without one. he wrote in a letter home. I walk here as much as I can. It's absolutely beautiful here.

I crossed Westminster Bridge every morning and evening and know what it looks like when the sun's setting behind Westminster Abbey and the Houses of Parliament.