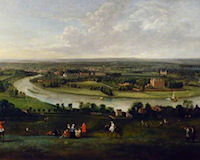 The only view in England protected by law.

Description: This is Richmond Hill - the only view in England protected by an Act of Parliament to protect the land on and below Richmond Hill and thus preserve the fine foreground views to the west and south.

It can be accessed and traversed by steps called Terrace Walk, laid out in the 18th century leading down to the river.

The spectacular views from here were immortalised in paintings by Sir Joshua Reynolds and J.M.W. Turner.

Fame tells of groves from England far away
Groves that inspire the Nightingale to trill
And modulate, with subtle reach of skill
Elsewhere unmatched, her ever-varying lay;
Such bold report I venture to gainsay:
For I have heard the quire of Richmond hill
Chanting, with indefatigable bill,
Strains that recalled to mind a distant day;
When, haply under shade of that same wood,
And scarcely conscious of the dashing oars
Plied steadily between those willowly shores,
The sweet-souled Poet of the Seasons stood
Listening, and listening long, in rapturous mood,
Ye heavenly Birds! To your Progenitors.


Indeed Richmond Hill was once quite famous for it's nightingales.

It was also described by Sir Walter Scott as an unrivalled landscape.


Credits: Painting circa 1722 by Peter Tillemans, courtesy of the Government Art Collection.