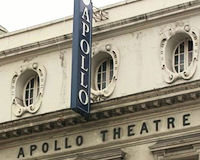 The theatre where the ceiling collapsed in 2013.

Description: This is the Shaftesbury Avenue theatre that saw it's ceiling collapse on December 19th 2013 injuring almost 100 attendees.

When it first opened in 1901 it caused a public uproar, with a 100% selected audience for the first performance. The Times allegedly refused to review the private opening, instead waiting until the first public production on the following day.

The First ever London Theatre», 2.4km