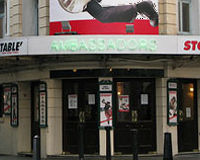 The tiny theatre where Vivien Leigh made her West End debut.

Description: The Grade II listed Ambassadors Theatre in Seven Dials is one of the most intimate West End theatres seating a maximum of just 444, causing owner Sir Cameron Mackintosh to put in plans in (February 2018) to demolish the interior to accommodate more customers.

It was designed by architect WGR Sprague, opening on 5th June 1913, 3 years before its non-identical twin St Martins across the street eventually opened.

Academy award-winning actress Vivien Leigh made her West End debut here in 1935, starring in The Mask of Virtue. Laurence Olivier first saw her perform here and congratulated her on her performance after the show, the start of a friendship which turned into an affair later.

Agatha Christie's The Mousetrap, started here, running from 1952 to 1974 before moving next door to the St Martin's Theatre where it continues it's record-run today.