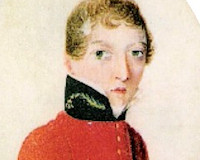 The celebrated doctor who held a lifelong secret.

Description: The acclaimed Dr James Barry lived here towards the end of his life and eventually died here on July 25th, 1865.

He was born in Ireland, and he studied at University of Edinburgh Medical School gaining his MD in 1812. His birth date is unclear but between 1889 and 1899 (which certainly would make him a child prodigy).

After moving to London he successfully took the examination for the Royal College of Surgeons of England, and subsequently qualifying as a Regimental Assistant. This enabled him to take posts with the British Army in Plymouth, India, Malta, Canada, Mauritius, Trinidad, and South Africa.

In the latter he performed one of the first successful Caesarean sections.

He retired in 1864 and returned to England, where he died from dysentery on 25th July 1865. In examination of his body, it was found that he had been born a woman (later identified as being born as Margaret Ann Bulkley).

Later it turned out that Barry was the niece of James Barry the painter.

The Chinese Bridge and Pagoda», 1.0km