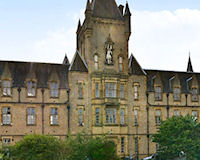 Dating to 1859 it began as the Royal Victoria Patriotic School, an asylum for girls orphaned during the Crimean War. They had it tough, having to pump water up to the tanks in the towers, as well as do all the washing. They also had to wash outside in cold water.

During the Second World War, MI5 used it as the infamous London Reception Centre. Interrogators including 'spycatcher' Colonel Oreste Pinto interviewed over 30,000 immigrants here over a period of four years.

It's a Grade II* Listed Building designed by the architect Major Rohde Hawkins.

Above the entrance is a spendid statue of St George and the Dragon in a niche.

Architecture Not To Be Missed», 4.2km