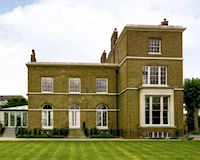 Turner was filmed here in this splendid Georgian mansion.

Description: Secluded Rushgrove House is a private listed residence built in 1816/17 for John Cook, who had made his money supplying meat to the nearby barracks.

Later it was snapped up by the Admiralty to become home of General Sir Anthony Blaxland Stransham, commandant of the nearby Royal Marine Barracks.

Director Mike Leigh used Rushgrove House as a location in his 2014 biopic of JMW Turner, Turner starring Timothy Spall as the landscape painter.

The 10 bedroom house was sold by the army in 1986 and was used as a family home until 2016 when it went up for sale at 2.85m potentially to be split into apartments.

In the grounds is Mulgrave Pond, formed in the early 1750s as a reservoir for the royal dockyard and adapted to serve steam engines at the Arsenal (via a subterranean pipe under Wellington Street!).

Tragedy struck here on 6th february 1831, when five children perished after ice on the pond gave way. Apparently a couple of boys named Bell & Mosely decided to check if the ice would support them in ice skating - they threw a halfpenny coin for the other children to scramble after. However, 17 boys rushed to the same spot causing the ice to give way and all of them went into the icy water. Unfortunately only twelve of them managed to scramble their way out. Bell and Mosely were severely reprimanded for their actions at the inquest and appeared to show great remorse. A verdict of accidental death was returned.

Architecture Not To Be Missed», 13.km