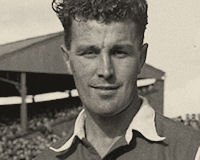 The pub once run by Arsenal and Middlesex legend Leslie Compton.

Description: This Grade II listed building used to be The Hanley Arms, a grand Victorian pub, closed in early 2007.

Leslie Compton (1912-1984) became landlord in 1956 and famously had a photo for the press where he serves a pint to the then Arsenal manager Tom Whittaker.

Tough defender Compton played both football and cricket in an illustrious sporting career, playing for both Arsenal (252 appearances) and wicketkeeper for Middlesex!

He is holder of a record - at 38 years and 64 days Compton became the oldest post-war England debutant and the oldest ever outfield player to debut. A record unlikely to be broken!

He was historically slightly overshadowed by his little brother Denis Compton. Leslie played 272 times for Middlesex (along with Denis), scoring 5,814 runs, taking 468 catches and 131 stumpings.

Today it retains some features outside and inside, and is now home to the Masjid -e-Yusuf mosque.

In 1962 Compton became landlord of The Prince of Wales in Highgate.