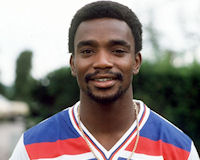 Description: Laurie Cunningham, the first ever black player to represent England at under-21 level, was born in Brookside Place, Archway, but grew up here in Lancaster Road

At a time when racism was rife at football, Cunningham was the first ever black player to represent England at under-21 level.

By the age of 14 Cunningham had been spotted by Arsenal scouts and was invited to train at Highbury twice a week and trained alongside future Gunners legend Liam Brady. However, he didnt progress beyond schoolboy and Arsenal let him go at the age of 16. He played for Highgate North Hill his manager got him a trial at Leyton Orient where manager George Petchey signed him on the spot, commenting Id never seen a 16-year-old like him before, he could do everything.

As he became sought-after, he moved to West Bromwich Albion. Then two years later in June 1979, his transfer to Real Madrid stunned the football world. He became the first Englishman to play for one of the world's biggest clubs. There he won the League and Cup Double in his first season and reached the European Cup Final in 1981 where Madrid lost to Liverpool.

Sadly Cunningham died in a car crash in Madrid in 1989, and he became only the second ever footballer to have been recognised with a blue plaque (after Bobby Moore).