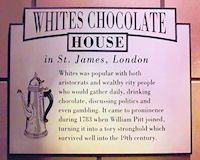 Description: This was once the centre of London's celebrated scene; White's was established as a chocolate house in 1693.

Founder Francis White was a prosperous man; in 1702 he was described as 'the Chocolatt Man in St. James Street'. After his death Mrs White ran it well, with records showing that she also sold tickets for balls at the King's Theatre in the Haymarket here, as well as the hiring or buying of 'Masquerade Habits'. She died in 1729, and the business stayed in the family for a good while.

On the 28th April 1733 disasters occurs, a fire began early in the morning 'in White's Chocolate House in a gaming room called Hell', and burned so fast that the landlord's wife had to leap from the upstairs window. Sir Andrew Fountaine's 'fine Collection of Paintings' was also destroyed. The scene and the temporary removal of White's down the road was immortalised by Hogarth in the final version of the engraving of Plate IV of the 'Rake's Progress' - A flash of lightning is seen descending upon a house marked 'White'.

One story goes that in 1750, a man collapsed across the road and some passers-by carried him into the nearest building - White's where instead of helping him proceeded to open a book on whether he would survive. Horace Walpole wrote that the customers 'immediately made bets whether he was dead or not.' When some went to help 'the wagerers for his death interposed, and said it would affect the fairness of the bet.'. The man died shortly afterwards.

White's has always had a history of gaming but the first record of a set of club rules is dated 30th October 1736: 'Rules of the Old Club at White's'. The club became one of the longest running clubs on original premises in London for more than 200 years.

The club had a reputation for both exclusivity and the often dodgy behaviour of its members. Author, Jonathan Swift, referred to White's as the bane of half the English nobility.

Some of the legendary wagers placed by members included 'Mr Howard bets Colonel Cooke six guineas that six members of White's Club die between this day of July 1818 and this day of 1819' (Colonel Cooke won). Dr Matthew Green wrote in the Telegraph There are bets on which celebrities will outlive others; the length of pregnancies; the outcomes of battles; the madness of George III; the future price of stock; and whether a politician will turn up to the Commons in a red gown or not.