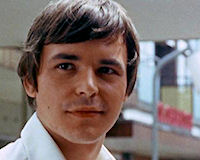 This is where comedy actor Barry Evans lived.

Description: Barry Evans big acting breakthrough was in the 1967 cult film Here We Go Round The Mulberry Bush. Then he starred as a television doctor in both Doctor in the House and then Doctor at Large but fame came knocking when he was the lead EAL teacher in the controversially un-PC ITV sitcom Mind Your Language.

Barry lived here at 8 Buckland Crescent from 1960 until about 1981, close to his long-time actor friend Jimmy Gardner.

When acting dried up he suffered depression and Gardner said For the last four or five years in London, he had worked very little. Evans lived alone in the village of Claybrooke Magna, Leicestershire, where he worked as a taxi driver. He died in 1998; Police discovered his body after going to his house to tell him they had recovered his stolen car.