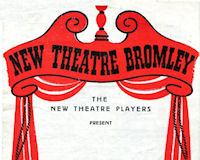 Description: This is Barclays Bank, on the site of what used to be the Bromley New Theatre.

In 1889 the Grand Hall and Country Club opened here, partly built over a former duck pond. The auditorium contained a large swimming pool, intended to be boarded over when using the hall for dances or theatricals, and above the stage was a tank capable of holding 1,000+ gallons of water. Sadly, it was never used due to an inexplicable crack right across the middle during building, and the idea was thus abandoned. They laid a permanent floor over the pool supported by steel girders.

It reopened as the New Theatre in December 1947 by a syndicate sponsored by J. Arthur Rank, until it was sadly destroyed by fire on 6th May 1971.

Only Fools and Horses Star David Jason made his first acting break here in a Noel Coward play in 1965.

Matinee With A Difference», 9.3km