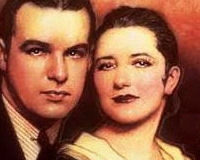 This is where famous Broadway actress Lynn Fontanne grew up.

Description: Acclaimed actress Lynn Fontanne (1887-1983) was born here and lived here until the age of 29.

She married Alfred Lunt in 1922 and they went to the US to become one of the most powerful acting partnerships in American theatre history.

Fontanne was a major star in the United States for over 40 years, and with her husband shared a special Tony Award in 1970.

They both won Emmy Awards in 1965 and Broadway's Lunt-Fontanne Theatre was named after them.

Fontanne is regarded as one of the American theatres greatest leading ladies of the 20th century.