Mary Moser and the RA 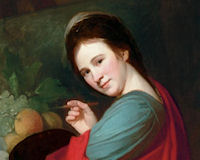 Founding member of the Royal Academy lived and died here.

Description: This is where Mrs Mary Lloyd (born Mary Moser), who was one of the two female founding members of the Royal Academy, died in 1819.

Mary Moser gained her artistic reputation as a flower painter, despite the opportunities for formal training available to women quite limited.

As women, Kauffman and Moser were sadly prohibited from attending committee meetings and dinners, however their voices within the establishment were both active and influential.

She was much patronised by Queen Charlotte, who employed her to decorate an entire room at Frogmore House in Windsor, paying her a handsome sum.

Portraits of Mrs. Lloyd and Angelica Kauffmann, the only two ladies ever elected royal academicians, can be viewed on the wall in Zoffany's 'Life School of the Royal Academy,' engraved by Earlom.

Surviving her husband several years, Mrs. Lloyd died here, and the event was colourfully documented in Nollekens and his Times, as 'Mrs Lloyd died at 10 o'clock on Sunday morning, May 2nd 1819, in the front room of her lodgings.'

Mary Moser's death, also meant there wouldn't be another woman accepted into the Academy for another 168 years.