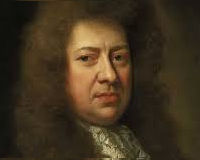 He was the fifth of 11 children, but all his older siblings died early leaving him the eldest child.

Note that the handsome plaque states the incorrect year, due to a calendar error after the 1753 calendar correction move.

While travelling in the course of his work he would stop at one of the many nearby pubs or coffee houses and often call in on his parents, still living here, through the 1660s.

The theatre burned down in the Great Fire of London in 1666 as did all of Salisbury Court.