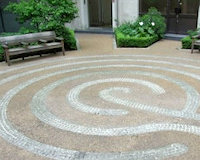 Stone labyrinth in the heart of the city of London.

Description: This courtyard garden, an oasis in the bustling city, is on the former churchyard of St Gabriel of Fenchurch (dating from circa 1331), one of the many churches burned to the ground in the Fire of London and never rebuilt.

The former road and park began being landscaped in 2008 with new paving (amongst the odd remaining gravestone and tomb), modern seating and planting.

The labyrinth was completed in 2010 for the London Centre for Spiritual Direction, for the labyrinth has long been a powerful aid to prayer, mindfulness and discernment. the labyrinth is rich with resonances of incarnation, resurrection and the pilgrimage of life, not just in the Christian tradition, also many others.

There is also a striking sculpture by Michael Visocchi called The Gilt of Cain. It was unveiled by Archbishop Desmond Tutu to commemorate the abolition of the transatlantic slave trade in 1807. It depicts sugar canes rising from the ground around a slave auctioneer's pulpit.