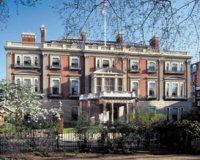 This is home of the Wallace Collection of art.

Description: The Wallace Collection was founded by the 4th Lord Herford (1800-1870) who owned a house in Piccadilly but left to live in Paris for the remainder of his life.

When his son inherited the collection and decided to move it to London, he returned to find the house still fully maintained by the staff his father had continued to employ despite the house being unused for 35 years.

Lord Hertford's main interest in life was to buy first-class objects and when Richard Wallace his son returned to the house, he found Reynolds, Gainsborough, Van Dyck and Ruben's Rainbow under a layer of dust.

Sir Richard and his French wife lived here quietly, entertaining few friends, until he died. And then when she passed over her wishes were for the collection to be left to the nation.