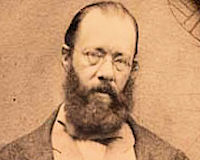 The man who created the limerick lived and worked here.

Description: The artist Edward Lear (1812-1888), famed for writing the Owl and the Pussycat, and popularising limiricks, was born in Holloway and was raised in Grays Inn Road.

The council's deputy leader, councillor Robert Davis, said: Edward Lear was one of the finest artists of his generation and anyone who has ever raised a smile to a cheeky limerick has Lear to thank for his creativity in popularising the poem. Or as Lear himself might have said: 'There once was a man named Lear, who lived in a spot close to here. This plaque unveiled today, is a fitting way, to pay tribute on his two hundredth year.'