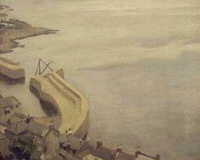 Harold was born in Nottingham and studied at the Nottingham School of Art where he met his wife to be Laura Johnson (1877- 1970). He continued his studies at the Royal College of Art and then in Paris under Jean Paul Laurens and Benjamin Constant, a conventional academic training.

However, following his return to England he and Laura painted in the Yorkshire fishing village of Staithes, where a colony of artists worked from the 1880's. On their return to London the Knights moved to St. Johns Wood.

Harold Knight died at the Colwall Park Hotel in Colwall, Herefordshire in 1961.

Banksy Off His Trolley», 2.2km

Riders of the Apocalypse», 6.8km