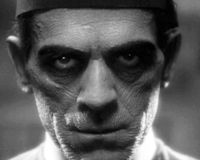 Description: Boris Karloff was a horror icon of the 1930s starring in Frankenstein, a part he was so famous for it was used as a running joke in 1941's Broadway show Arsenic And Old Lace where he played a gangster enraged to be mistaken for himself!

Born not far away in Camberwell, Karloff made maximum use of his bow-legged stance and back injuries sustained as a labourer with acclaimed performances in classic horror films The Mummy, The Mask Of Fun Manchu and The Secret Life Of Walter Mitty.

He eventually moved back to London, taking up residence here on 21st of May 1959 while he continued to appear in classics including Dr Seuss and The Girl From UNCLE. He moved out in 1965.