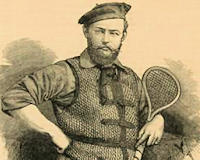 The home of the father of lawn tennis.

Description: This is the house where Major Walter Clopton Wingfield (1833-1912) lived for the last ten years of his life. Born in Wales, Wingfield served in the 1st Dragoon Guards.

Known as the 'father of lawn tennis', Walter Wingfield did more than anyone else to establish and codify the modern game. In 1874 he actually applied for a patent for the the game that he devised, and tried to call it (what we now call lawn tennis) 'Sphairistike' but it never did quite catch on.

Tennis was but one of his many endeavours, and an enthusiastic amateur inventor he tried (and failed) to develop group bicycle-riding in time to martial music, as described in his book Bicycle Gymkhana and Musical Rides (1897).

Wingfield became vice-president of 'The Universal Cookery and Food Association' and around 1890 he founded a culinary society called 'Le Cordon Rouge' intended to further the development of the science of cookery. The original Heston!

The house is the end house of part of a stuccoed terrace built in about 1850 by Thomas Cubitt. The blue plaque was added in 1987.

Arsenal and The Sutton Arms», 3.3km

The Lord Derby and Football», 9.4km