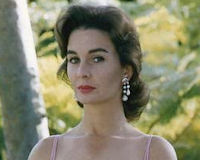 In 1932 the Simmons family moved to Cricklewood and then evacuated to Winscombe in Somerset for a period during the Blitz years of the World War II.

Her breakthrough came in 1943, a fortnight after she first attended the Aida Foster school of dance and drama, that she was chosen by producer and director Val Guest to appear in the film Give Us the Moon (1944) with Margaret Lockwood.

A brilliant natural actress and talented singer, Jean went on to star along with most of the great actors and directors in Britain and Hollywood.

In 1950 she had followed her future first husband, actor Stewart Granger, to Hollywood and they were married in Tucson, Arizona.

She won a Golden Globe for Best Actress in Guys and Dolls (1955), and won an Emmy Award for the miniseries The Thorn Birds (1983).