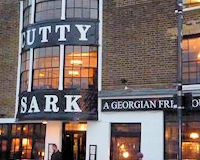 The pub renamed in honour of the Cutty Sark clipper.

Description: The Union Tavern was built here in the early 19th century, replacing an earlier pub, The Green Man. The land its built on is still Morden College property, as it has been for over 300 years.

It was initially called The Union Tavern celebrating the 1801 union of England and Ireland. It was renamed The Cutty Sark Tavern when the tea clipper came to Greenwich in 1951 as part of the Festival of Britain celebrations. The Cutty Sark clipper then found a permanent home just up the Thames Path in 1954.

The clipper Cutty Sark was constructed in Dumbarton in 1869 to ship tea from China to Britain in as short a time span as possible but only ended up working the tea route for a few years before being used to bring wool from Australia.

The building comprises three storeys with widely spaced, Georgian bow windows including the double name adorned frontage with fantastic views of the Thames.