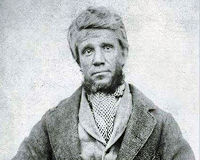 The home of one of Englands most wanted criminals in the 1870s.

Description: Once upon a time there was a row of suburban villas on both sides of the road here, not the garage and flats that currently occupy this junction. The 5 villas were called East Terrace and in the 1870's number 5 (the last before the railway line) was occupied by Mr. and Mrs Thompson.

However, Mr and Mrs Thompson, who lived quite respectable lives here were not who they appeared to be. Charles Frederick Peace (18321879) was a career burglar who had been on the run for 2 years for a murder in Sheffield.

Curiously, he had spent a week in Manchester following the trial of a murderer in court. Immediately on his return to Sheffield he murdered the husband of a woman he was having an affair with. He fled, despite a pronounced limp from an industrial accident when he was working in a mill as a boy.

As a master criminal he was living well off his exploits in Peckham, his home was full of musical instruments and when travelling at night he carried a violin case full of his housebreaking tools. Its thought that he often caught a train home after a housebreaking night and threw his loot from the train as it passed his house here, but some of this may be attributed to the comic books that followed his exploits.

He was eventually caught in Blackheath by a suspicious policeman by chance and he was apprehended and returned to Yorkshire for hanging in Leeds Prison. He did escape the train en route to Leeds by jumping from it at 45mph, nearly finishing him off early.

Famous Drinkers to die for», 5.7km