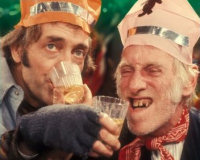 This is where actor Wilfred 'Dirty old man' Bramble was arrested

In fact it was THE public toilet where Wilfred Bramble, the actor who played Albert 'Dirty old man' Steptoe, was arrested and subsequently convicted of trying to procure a sexual partner.

Bouncers bounce back at KFC», 4.1km