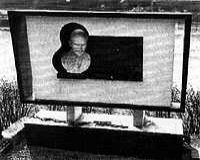 This is where Lubetkin's Lenin memorial stood until it's burial.

Description: Here in Holford Square a memorial to Lenin who lived near here briefly, stood for 10 years before being buried.

The Russian leader's memorial was more than little conroversial during the height of the Cold War. It suffered continual vandalism and it's creator Lubetkin kept a good number of replacement busts in storage.

A 24 hour police guard wasnt enough to stop it's abuse and Lubetkin, who had foreseen to move the monument to an entrance hall of a housing unit he was going to build nearby, decided to bury it on his own account, acting by surprise, and avoid the city governments intervention. There are photographs showing Lubetkin and his friend burying the monument.