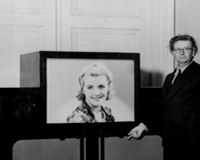 The first television demonstration was made in the loft here.

Description: It was here on 26th January 1926 in the loft rooms at 22 Frith Street, where scientist John Logie Baird first demonstrated the first television machine.

In the presence of the Royal Industrial Society, the Scot successfully transmitted moving pictures of his distinguished guests from one room to another.

The Times the following day published the news on page 26, telling us that the broadcast was successfully received by two special television receivers in Savoy Hill and Olympia while 'the ordinary listener, not equipped with a televisor, was able to receive the broadcast speeches but during the television part of the transmission heard a raucous howl.