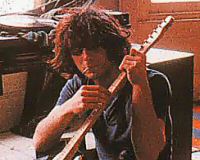 Pink Floyd's Syd Barrett lived and wrote many of his songs here.

Description: In 1966 Syd Barrett lived here with its owner, Peter Wynne-Wilson (the Floyd's oil light projectionist at the time).

It was while he was here that he wrote most of the songs that Barrett recorded with Pink Floyd.

He'd sit around with copious amounts of hash and grass and write these incredible songs, Peter recalled.

Peter Jenner, the Floyd's first manager, says The strongest image I always have of Syd is of him sitting in his flat in Earlham Street with his guitar and his book of songs which he represented by paintings with different coloured circles.

It was a place that Nigel Gordon, one of his Cambridge pals and inhabitants, describes now as the most iniquitous den in all of London.

This constant diet of hallucinogenics resulted initially in accelerated creativity but soon prompted the onset of Syd's permanent removal from normality. The poor lad didn't know whether he was awake or dreaming, says King. He never had the chance to re-establish reality.